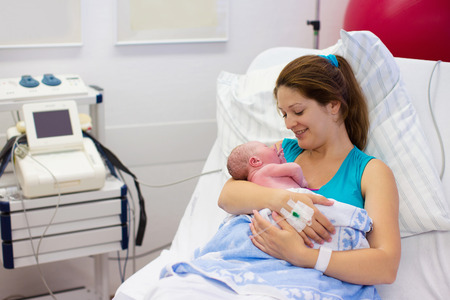 Since the early 20th century, it’s been standard practice for physicians to clamp and cut the umbilical cord of a newborn baby immediately after the mother has given birth. For many years, doctors believed that cutting the cord quickly reduced the chances of post-birth hemorrhaging in the mother. Now, however, the American College of Obstetricians and Gynecologists (ACOG) is advising doctors to wait at least 30 to 60 seconds after a birth to cut the umbilical cord.

The ACOG’s recommendation is based on new research which has found that waiting to cut the umbilical cord can allow more iron to reach a newborn baby’s brain, which is critical for brain development. One Swedish study conducted in 2011, for example, found that full-term babies whose umbilical cords were clamped and cut immediately experienced a 5 percent higher rate of iron deficiencies than babies whose cord cutting was delayed for three minutes after birth. By waiting to cut the cord, doctors can give babies a beneficial boost of iron which can prevent deficiencies and promote healthy brain development.

Waiting to cut the umbilical cord can have even greater benefits in preterm babies – reducing the chances of brain hemorrhaging and serious bowel infections which are common complications in premature births. In fact, delayed cord cutting has already been a common practice in preterm births for many years.

The period immediately after birth is a critical time in early child development, so the ACOG is urging obstetricians to take this new recommendation seriously. Hopefully, as researchers continue to learn more about neonatal health, obstetricians will be able to provide newborn babies with the best possible care available.

Consult an experienced medical malpractice attorney today if you believe there was negligence during your child’s birth.